Karmic Design Thinking - Part 2 - What is it?

The “Aahaa” moment that design thinking is probably much older than only a few decades. That moment came to me when I traveled to an ancient set of Buddhist caves in India. These caves are located in central India and are at least 2000 years old. Ajanta caves, as they are called, were lost to humanity for about 1000 odd years before a British soldier rediscovered the caves in his hunting expedition. If you are planning on visiting Mumbai or Pune, I would highly recommend visiting these caves and spend a few days admiring these beautiful caves. 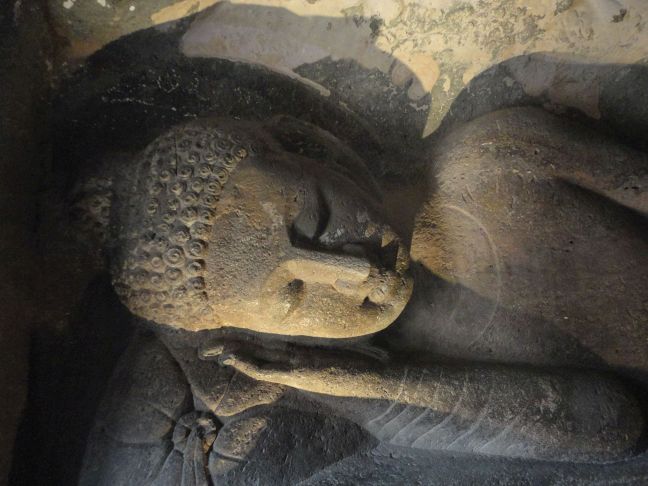 Mahaparinirvana or the attaining of Nirvana: This sculpture is my personal favorite (Cave #26). The top line of angels look happy and the bottom set of people look sad. The angels are happy since they will have Lord Buddha in their midst and the bottom set of earth people are sad because the Buddha is leaving them

In my bid to prepare for this trip to the ancient caves, I read up about the story of the British soldier, John Smith, and many more from the usual sources like Wikipedia. The story goes something like this. The soldier, to leave his mark behind, even climbed up a pile of wood piled up near a pillar, and signed his name (Please check out cave #10 and the right hand side pillar in the front at the height of about 7-8 feet to see the engraved name of the soldier. Vandalism becomes part of history :) )

This reading is usually part of my preparation for travel to any place. I stumbled upon an article on Gautham Buddha’s four noble truths. The article on Wikipedia mentioned that Buddha first postulated his noble truths to his five disciples in Sarnath in a deer park. His insights came from his 49 day meditation marathon in Bodh Gaya, India under a tree. Now, these four noble truths were:

I jumped with joy when I came to know of this explanation. In my mind, I did an exact one to one correlation of my “design thinking” design and the four noble truths that Buddha had put forward two and a half thousand years ago. My happiness knew no bounds and I felt the energy to explain everything around me.

Deflated because of the feeling that someone before me had invented this “design”. And that I had missed being the first guy to invent by about 2,500 years. Elated because this “design” has really stood the test of time. There are scores of people who have followed this paradigm and are current followers. You know, it is a religion now and not just a random design by some random blogger/teacher sitting in front of a laptop.

Another question that popped into my mind was - Ok, for once, let us assume what Lord Buddha talked about IS design thinking. But, what is the purpose of design thinking? What does one do with that? How could one use that in real work life or student life?

I turned to my personal spiritual Guru Shakya Muni (aka Buddha) for the answer. “To escape the birth-rebirth cycles” was the answer that he gave in 500 BC. Hmmm.. Tough one to decipher even in English. I thought about it for a long time and I meditated on that one as to what that may mean for me and my course design (Yes, yes, I do meditate every day for 15 minutes religiously).

It occurred to me one fine Wednesday morning (The day is not important since I made that one up) when my old trusted, but rusted phone asked if I minded if it updated me. I said yes and my rusted phone yowled at me saying that I had insufficient storage. In a bit of rage, I must have said something to the effect that it was my earlier birth’s Karma that I had landed up with such a phone. Oh, please don’t tell my phone that I said that. I really like my rusted phone. I can still put it in my pocket and there is no need to carry it in my hand.

Anyways, that was my trigger - multi-generations of software/hardware. That is what we are trying to escape. That is what Buddha was trying to tell us and it took me 2500 years of births and rebirths to understand this. No, not the android upgrade.

Every product or service is designed and redesigned to adapt to all possible needs and wants from the customer. Every product goes through a transformation from birth to death, usually referred to as an S-curve. The hockey stick curve which was independently discovered in four different fields. This is one S-curve for one product/service. This transforms as the product ages and finally when the product is phased out, the function is transferred to some other product/service before it finally, er…, croaks. The product starts out as a new kid in the block with a few geeks using it. Imagine that holding plastic boxes next to ear was a kid’s game about 25-30 years ago. Adults used to snigger and let the kids play with their “imagination” and comment to their colleagues “I don’t know where they get their stupid ideas from. Holding plastic boxes next to their ears and then staring at the same plastic boxes for the next hour or so. Kids these days need better games.” The kids of yesteryears had their last laugh when the same “adults”, now seniors are hooked on to their Whatsapp screens, playing the same stupid plastic box game years later. Talk about second childhood, eh, Shakespeare?

So, that new product starts getting accepted by a few more geeks and they spread the word. This phenomenon is described by Malcolm Gladwell in his book, Tipping Point.

Next up, the product starts gathering features and is on a low maintenance mode. Lots of new players mushroom offering their “me-too” product.

Once, the product goes past the mid way mark, the market sees consolidation and a few major players keep the lion’s share while the rest claw their way into unheard of markets. This is the honeymoon phase for the major players, since without much effort, the cash registers are ringing. Suddenly at some point of time, looks like the feature well has dried up and people have started talking about how the looks are far more important than the function. We have entered the design era of the S-curve. Aesthetics are very important and now, ease of use becomes prime. The product starts becoming simpler, more intelligent and the masses have started using it big time. This is an exciting phase as the price starts dropping with simplicity becoming paramount. Once, in this phase, one starts to see other geeky products hit the market. The next S-curve is priming up for limelight, but it is too early. There is still some life left in the previous S-curve. The next one starts borrowing resources from the previous generation. Abruptly, the current S-curve falls flat and the cash stream has dried up. The companies become sitting ducks for buy-outs. Geeks have already shifted out to trying out the next S-curve, as the trial period has started and the cycle starts all over again.

I felt that there is too much talk about design and form these days. Was it because I am interested in design that I hear more these days? Or is it reality that people are giving design more thought?

I thought about this even further.
Now, why is design thinking of interest to the industry or people, out of the blue?
I imagined a conversation between Lord Buddha (LB) and me (BR).

LB: The premise of all this lies in the fact that in the industry, people try to implement ideas so that they can all lead to revenues.
BR: But, Sir, all that sounds fine, the big question still remains whether all implemented ideas lead to revenue for the company?
LB: Then, the subsequent argument could be that we only implement revenue generating ideas.
BR: Sounds simple, but then my interest lies in how these revenue generating ideas are generated?
LB: It is better to seek these ideas rather than pursue every idea and face dead ends.
BR: Yes, yes, that would be true in an ideal world, in the world that you are in right now. We still live in a world which is governed by FUD.
LB: FUD? Is that the name of your ruler?
BR: Fear, Uncertainty, Doubt. That is what Neo from “The Matrix” had to let go before jumping off that simulated building, you know when Morpheus asked him to jump.
LB: Now, why would he do that?
BR: To attain enlightenment and fly like Superman. There were no Bodhi trees in “The Matrix”.
LB: Oh, that? Have no fear, when I am here. (with right palm raised) I will quote one from your era for your own reference.

BR: I’ll write that down. Great, now where do I find these problems? LB: My disciples never required this level of spoon feeding as you do, Bala. BR: “There is no spoon.” LB: Pardon me. BR: Never mind.

Great, this means I’ll have to figure out all this myself. Sheesh! Consultants were not what they are now.

Traditional design thinking seems to suggest people centric approach. Not a bad start. We can observe people as they go about their daily business and figure out what they need.

My counter self asked me (you know the jerk inside me. C’mon! everyone has one inside, right? Or is it only me? Oh Lord Buddha, I need to see a doc) - Why would that be useful? Observing people and figuring out stuff seems like the wrong path.

I couldn’t get many answers from deep within, so I ventured out and researched online. Harvard Business Review seems to have given it some thought.

Many companies large and small are moving from products to services, hardware to software, physical to digital and hence are focussing on user experience
Harvard Business Review Article

User experience doesn’t mean pretty interfaces and glossy exteriors only, which was the image I carried in my head when I thought about designs and designers. This was up until my designer friends pounced on me and gave my material scientific brain a whacking. Form and function, both are equally important, the whacking had messages like these. As you can see, I have very good friends… :)

So, everyone wants to go the design thinking way, but how do they go about it?
The method suggested by design schools and firms is simple -

The solutions evolve as time progresses and you will get great feedback from your first set of customers. You can fix them and life goes on well. The point where I find troubling is that some set of inspired designers come up with great ideas quickly and hence the process is robust. With the experience of TRIZ and systematic problem solving, I got a sinking feeling about people who don’t necessarily feel as inspired as a designer who is knee deep into the problem.

What if two methodologies talked to each other?

Since, this new thinking methodology is heavily inspired by Lord Buddha’s four noble truths, I call this “new” “old” thinking approach as Karmic Design Thinking, you know, originating out of Karma, the Karma arising out of rebirths.

Next up, concluding episode of this series, Karmic Design Thinking - Part 3 - Defining Structure.