How to add an extra day to your week

We moved into our current home about a year ago. A nice cozy apartment in a bustling neighborhood. The first challenge we faced at the new place was a stuck entrance door that wouldn’t open. When we had first seen the house, the person who had shown us around hadn’t faced any such problem (as far as my limited working memory could recollect).

A bit frustrated at not being able to enter the apartment, I called up the landlord. He replied that the door was swollen because of the rains. He went on to mention that the door was actually unlocked and all I had to do was to push hard.

Ok, now I knew what I had to do. Push the door with all my might. And so, I gave it a shove. Not once, not twice, but a good ten times.

In that moment of weakness, I looked around. The movers had started to pile up furniture all around me, as I struggled to open the door. The pressure was too much for me to handle. With one determined and desperate move, I pushed hard. And the door opened.

Meanwhile, I had been wanting to write blog posts regularly. But my calendar was as swollen as the door in the rainy season. I had classes to teach, errands to run, walks to walk, meetings to attend. A calendar full of stuff and my energy running low. I tried not one time, but many times to fit writing into my schedule, without much success. My to-do items were piling up.

I wondered whether I could apply the analogy of the door problem. Perhaps the to-do list required one determined and desperate push. My brain started to hurt even trying to think about it.

Returning to the jammed door problem, the ordeal was far from over. Every time we had to open the door, the experience felt like working out in a gym. Now, not every one in my household is blessed with the same Herculean physique that I possess. And so I was assigned the task of opening the door every single time, no matter what I was in the midst of doing.

The problem began to weigh on my mind. I decided to investigate the basic reason for the difficulty in opening the door.

Here’s how I reasoned:

For the next two days, I spent considerable time trying to remove all the excess wood I saw on the vertical frame.

The door was as stuck as it was before. I refused to take the easy route of calling for professional help.

I am a born problem-solver! I refuse to do it the easy way.

Calendar:
Going back to my calendar, the vertical rows of the calendar were driving me to the wall. I had to find a way to loosen it up. Chamfer it on the sides? How does one do that with a calendar? But if the chamfering hadn’t helped me with the door, how would it help me here?

Oh God! I was getting obsessed with the calendar.

Door:
Meanwhile, a horizontal granite slab underneath my problematic door had moved out of position and required immediate fixing.

I had some dry cement at home. With the help of the seven-year-old, I mixed in some water and smeared a bit of the concoction underneath the loose slab. I let it dry for a while.

To clear the resulting mess, I opened the door. Wait a minute! The door opened so smoothly now.

The vertical frame had never been the source of the problem; it was the horizontal slab that had to be fixed. That slab had been preventing the door from moving freely. 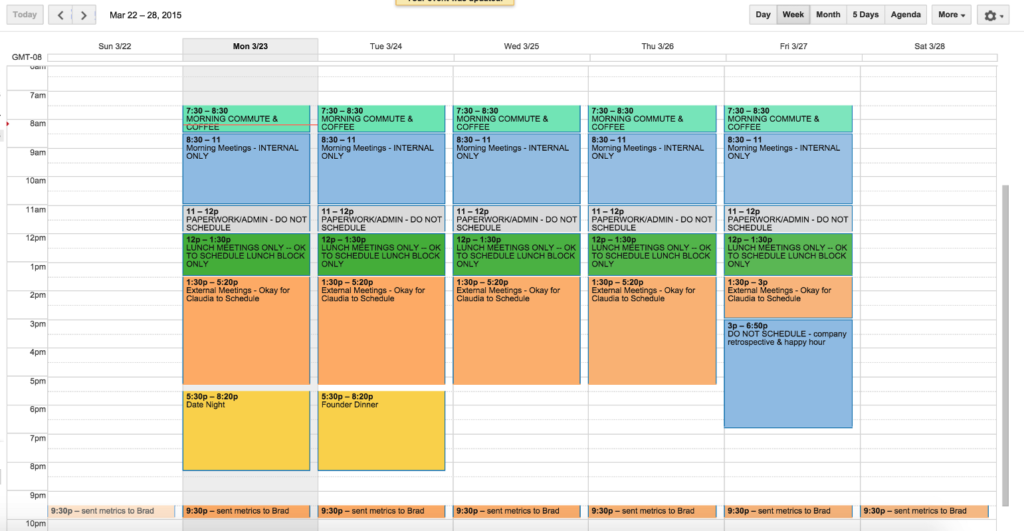 Ahaa!!! The calendar had vertical frames - the day schedule. All along, I had thought that they were the source of the scheduling problem. However, it was the horizontal slab that could help me find a solution. So all I had to do was to fix this horizontal slab.

How do I create a horizontal slab in my calendar?

An hour a day in the morning much before anyone in the house woke up. 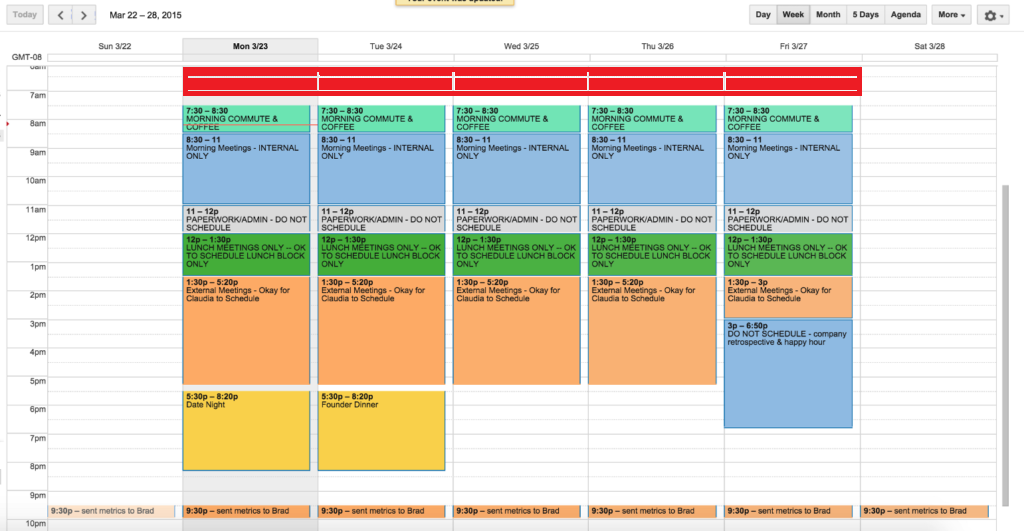 *Birth of the horizontal day*

So, here are steps for adding that extra day into your swelling calendar.

P.S - A year later, the door is operating without a hitch, and I am still writing posts :)

P.P.S - A big thank you to the editor of this post - Anita Nagarajan